We welcome comment an any topic... This website, our activities, our product, our service, or life in general. Do email us from the CWW Contact page

If you cannot visit us in Filkins,

A History of the Cotswold Sheep

year. It is long-stapled (more than six inches), reasonably lustrous and of mid 40's quality

(For comparison Merino is mid 60's plus, Lincoln about mid 30's). Until recently,

mainly for carpets and industrial cloths.

its use. In particular, the natural lustre and the clarity with which it accepts dye made the

wool ideal for loose-twist worsted spinning, and weaving into soft-furnishing cloths - a

range of dramatic block-weave throws and rugs. Visitors are welcome all year at the mill

to see both the processes involved and the products.

the Cotswold breed, so this is a good time for re-appraisal. For too long the illustrious

historical pedigree of Cotswold wool has been ignored as irrelevant.

But it was not always so. The Cotswolds are indelibly marked with the history of the

Cotswold sheep and its fleece. But it is a puzzling, clouded history. When Aldous Huxley

nearly said that facts begin as heresies and end as superstitions, he might have been

thinking of the Cotswold sheep. For although the great Wool Churches stand four-square

in many a Cotswold village, as solid testimony to the power and wealth of the medieval

merchants who endowed them, not much can be said with certainty about the wool which

the Cotswold sheep provided. There is certainly a lot of superstition: even a bogus

derivation of the very word Cotswold (sheep cot on the wold, or open hillside) has been

widely used to puff the influence of wool in the area.

Certainly wool has long been an important English commodity, and the Cotswolds an

important source for it. 500 years ago wise men agreed that half the wealth of England

the Saracens. The Lord Chancellor sits in The House of Lords to this day on a sack

in this country's affairs. The medieval weavers of 12th century Flanders happily sang:

The best wool in Europe is English

and the best wool in England is Cotswold

But what sort of wool was it that they prized so highly?

There is evidence that the Romans brought sheep with them as they battled northwards,

settlement at Corinium, the modern Cirencester. They would have valued these sheep for

their milk and for their fleece: shivering Southern European mercenary soldiers needed

warm winter coats. There is further evidence, based mostly on scanty skeletal remains,

and indeed of all the English long-wool breeds.

The temptation is to look at a Cotswold sheep today, to sink one's hand in its thick

lustrous long-wool fleece, and think fondly of an unbroken pedigree stretching back 2000

years to those early Roman farmers. The problem is that for most of the intervening years

virtually nothing is known for sure. Shepherds reasonably enough have rarely thought it

sensible to spend their time writing down descriptions of their flocks: the first book in

Guide), and the first comprehensive resumé of English wool not until 1809 (Luccock - An

Essay on Wool). But by then, the early  19th century, the heyday of the Cotswold sheep

was over. And of course, woollen cloth gets worn out, and is attacked by moth and

During the Early Medieval centuries England was a relatively underpopulated country,

their fleece. Perhaps 500,000 sheep roamed the Cotswolds, and most of their wool was

exported to Flanders and Lombardy; more densely populated countries which could not

spare land for wool growing. Thousands upon thousands of pack-horses laden with

wool-bales wound their way down from the High Cotswold hills to The Thames. They

crossed the river at Radcot and proceeded southwards to Southampton, or saw their loads

shipped on barges to London. The continental weavers paid royally for the wool, the

Cotswold merchants grew rich and built their churches, and the English crown paid its

way with the taxes levied on the trade.

Cotswolds) the long, heavy, lashy wool that the modern Cotswold bears, or something

shorter, softer and more like the Ryeland wool from Herefordshire which was equally

important to the medieval weavers?

shorn Cotswolds just like those which crop the grass today, and some commentators

suggest the Cotswold was always a big, long-woolled breed (Youatt, for instance, quotes

that sage Gervase Markham to this effect). But others suggest that the wool was once

much softer: Michael Drayton, writing at the end of the 16th  century suggests that

Cotswold wool was very fine: it comes very near that of Spain, for from it a thread may

be drawn as fine as silk.

This Spanish comparison is important, because one conundrum revolves around the

English wool-weaving industry. Spain was the home of the fine-woolled merino sheep,

and it is inconceivable that English, and specifically Cotswold sheep, could have been so

fine as to be worth cross-breeding with merinos. The most likely explanation is that

Cotswolds were different from merinos: long-woolled enough to provide fleece to make

Until the late 19th century, and advanced mechanical innovation, it was not possible to

direction of the yarn. Then tight, flat yarn could be spun and tough, sleek cloth could be

woven: quite different from the spongy, less sophisticated cloths which could be woven

Cotswold sheep were shorter and softer fleeced than they are today, but their wool was

still lustrous and strong enough to be ideal for worsted spinning. If nothing else,

nobles with flowing, draping cloaks to wear over their shirts of soft, fluffy merino.

During the 16th and 17th centuries, the rising clatter of loom-shuttles in the valleys

cloth manufacturer. So complete was this change that the crown eventually forbade the

export of fleece altogether, and it remained illegal until 1824. Although, gradually, vast

wools (including Cotswold) which helped establish England's superiority as a woollen

To some extent this issue of the nature of Cotswold wool is one of semantics: as William

Marshall wrote, after he rode the Cotswold hills at the end of the 18th century, the

Cotswold is a breed which has been prevalent on these hills, [since] time immemorial: it

has been improved, but has not changed. (During the Improving Years of the 18th

techniques.) Or as Ezra Carman wrote disarmingly in 1892, as he strove to sum up the

evidence of three hundred years of literature about Cotswold fleece: It is difficult to

reconcile these opinions, nor indeed is it necessary; the Cotswolds beyond the memory of

our day have long been a long-woolled race and valuable... for their wool.

So, superstitions and all, in this volatile world perhaps it is acceptable, even necessary

that there are these noble, mythic links with the past. If this be so then The Golden

Fleece, which might have provided uniforms for the Roman legions, paid for the

Long live the Lion of The Cotswolds.

The bibliography of English wool and woollen textiles is vast. Here are a few of the more

interesting sources and historical reviews of the literature. Many of these books contain

Ellis, W. A Complete System... The Shepherd's Sure Guide London 1749

(Michigan State Board of Agriculture) The Cotswold... Lansing (USA) 1865 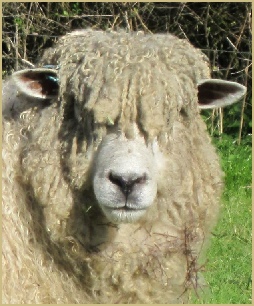